Check out 15 of the best ideas we found when we took to the Internet to gather ideas.

1. Sewn bandana bib from a t-shirt 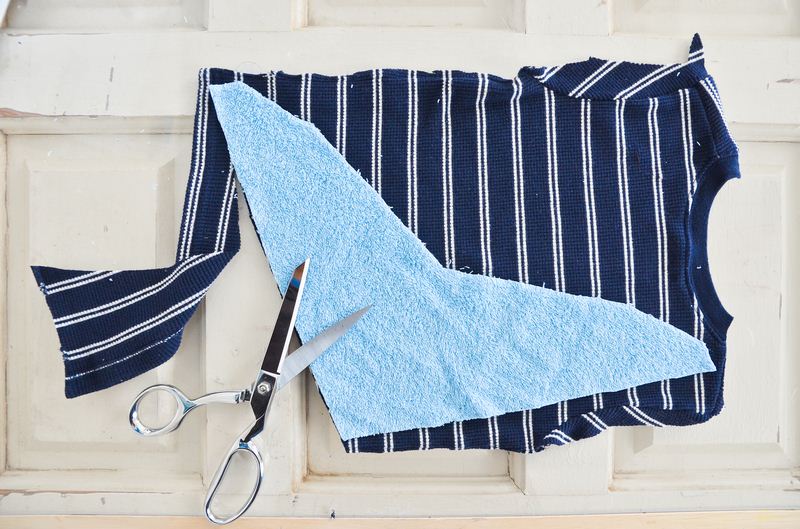 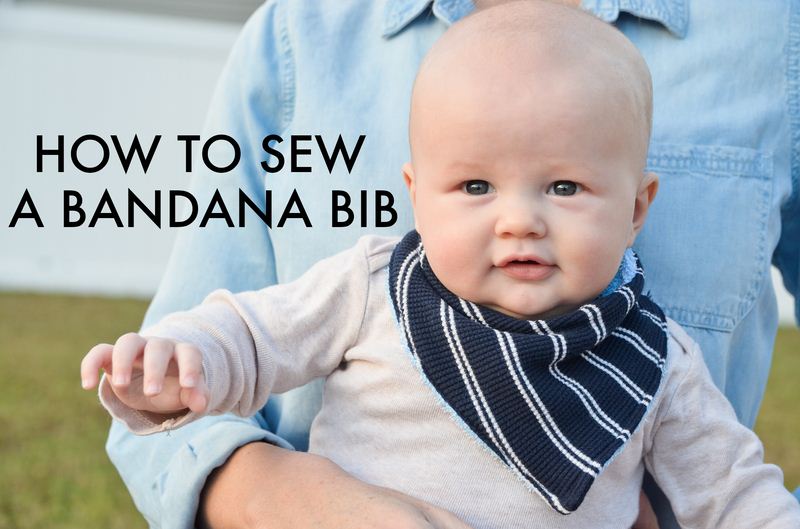 Okay, we know we said that this post would be primarily about crafts made from bandanas, but this adorable baby bandana bib caught our eye immediately and it was so cute that we just couldn’t pass up the chance to include it! Project Nursery guides you through the process of making a neck bandana style bib. As if that’s not a good enough project in itself, they also show you how to do it by upcycling a t-shirt and a piece of an old towel. We love upcycling! 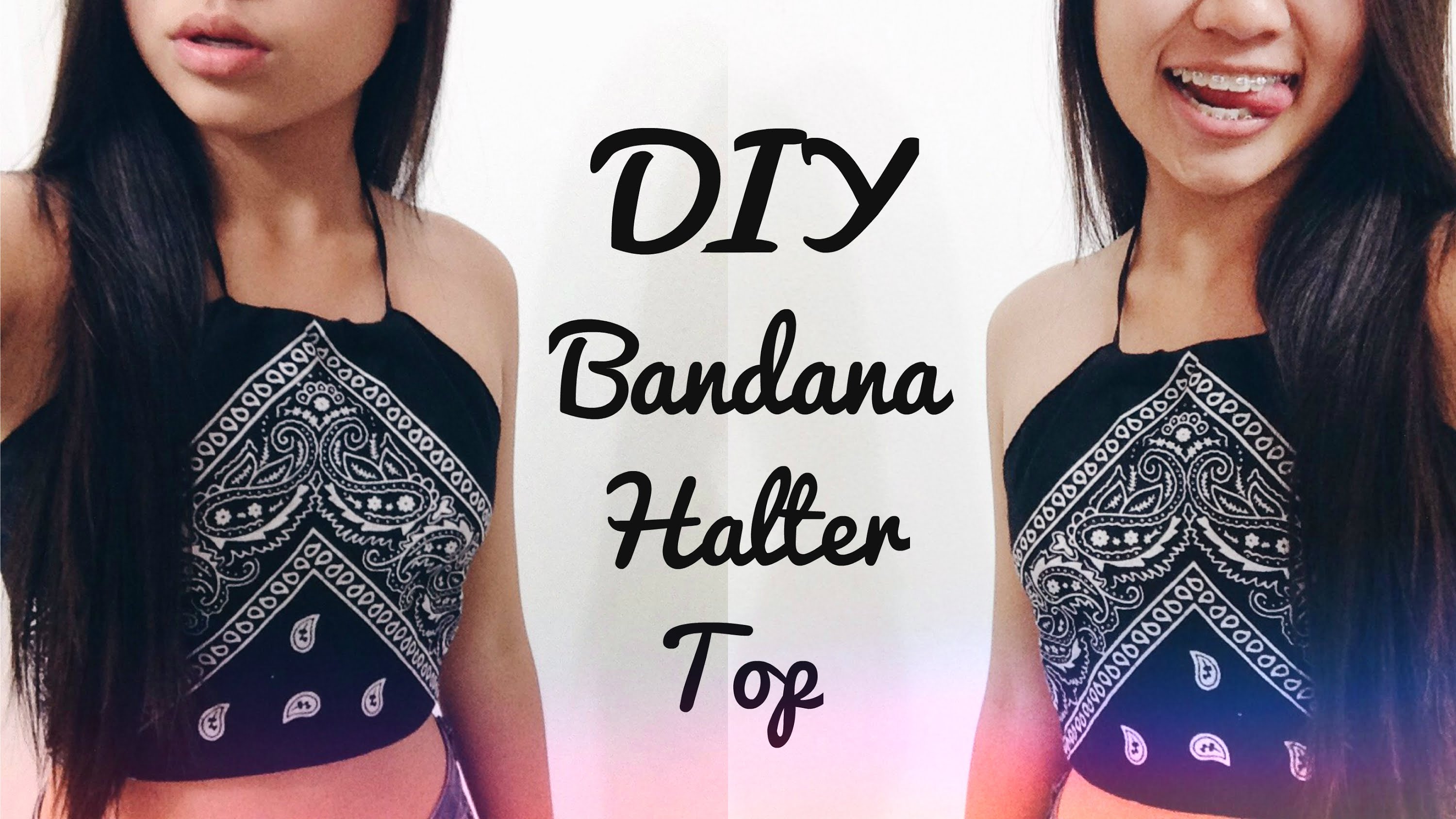 The last time you were folding your favourite bandana to tie it in your hair, did you happen to hold it up and realize that it was a decent enough width to fit right around your torso? Well, we know a regular bandana all by itself doesn’t necessarily make a top (at least not one that will stay on very well, anyways), but that doesn’t mean you can’t make it into one! Ayyitsteddy shows you how to make a very cool, very casually looking bandana halter top that will look great with jeans or cut offs. 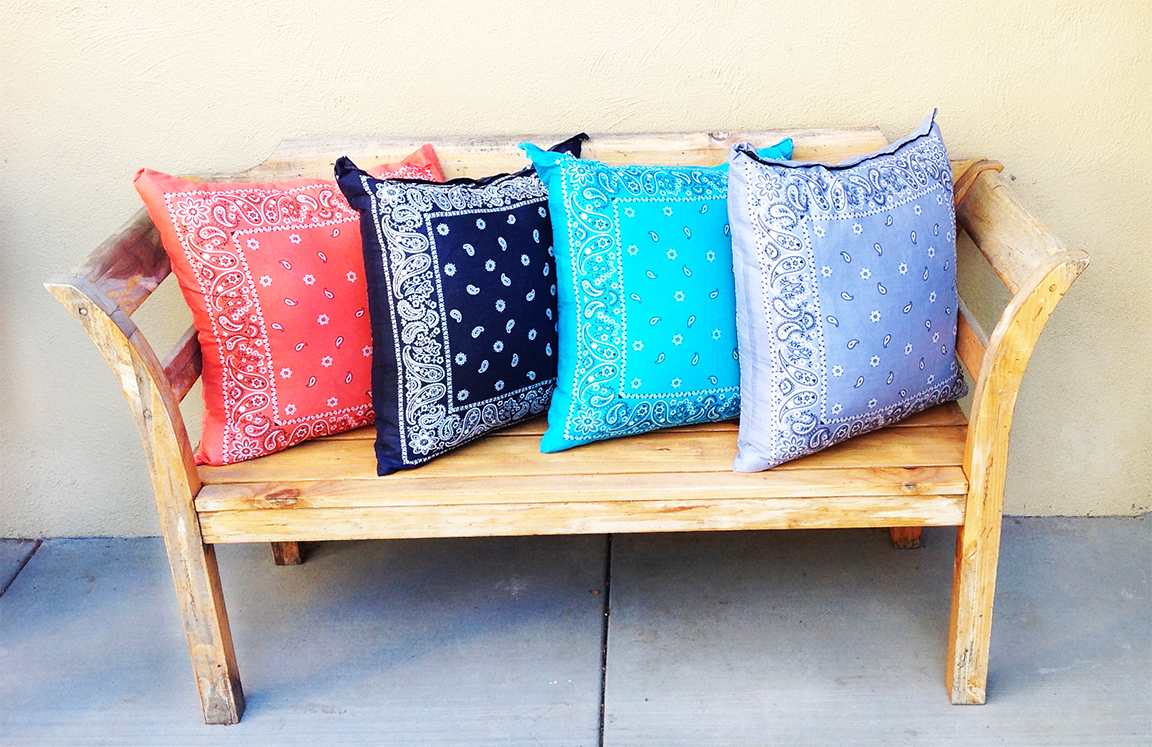 Perhaps you’re quite taken with the idea of using your sewing skills to turn some old bandanas into something new and cool but you’re quite new to the world of sewing and you feel like you could use a little more practice in simple straight lines before you tackle actual clothing? In that case, we’d totally suggest taking a look at how Design Intervention Diary made a series of pretty throw pillows simply by sewing pairs of matching bandanas together at the edges. 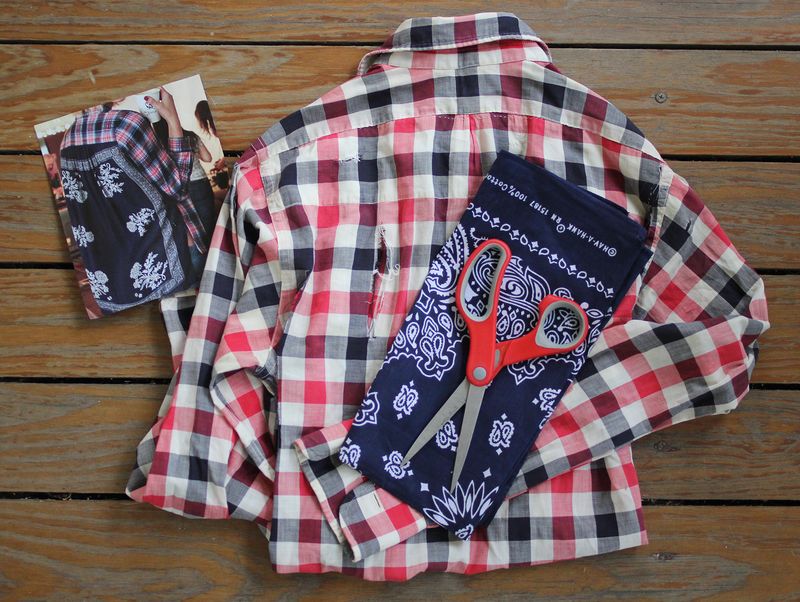 Okay, so perhaps you’re not ready to make an entire shirt from scratch yourself because, even though you’re okay at basic sewing, you’re not yet great at patterning and seaming unique shapes together? Then perhaps you’d prefer to simply add to or embellish an already existing shirt instead! We adore this casual, country chic idea from A Beautiful Mess. Their tutorial shows you how to add a bandana to the back of a plaid shirt for contrast. 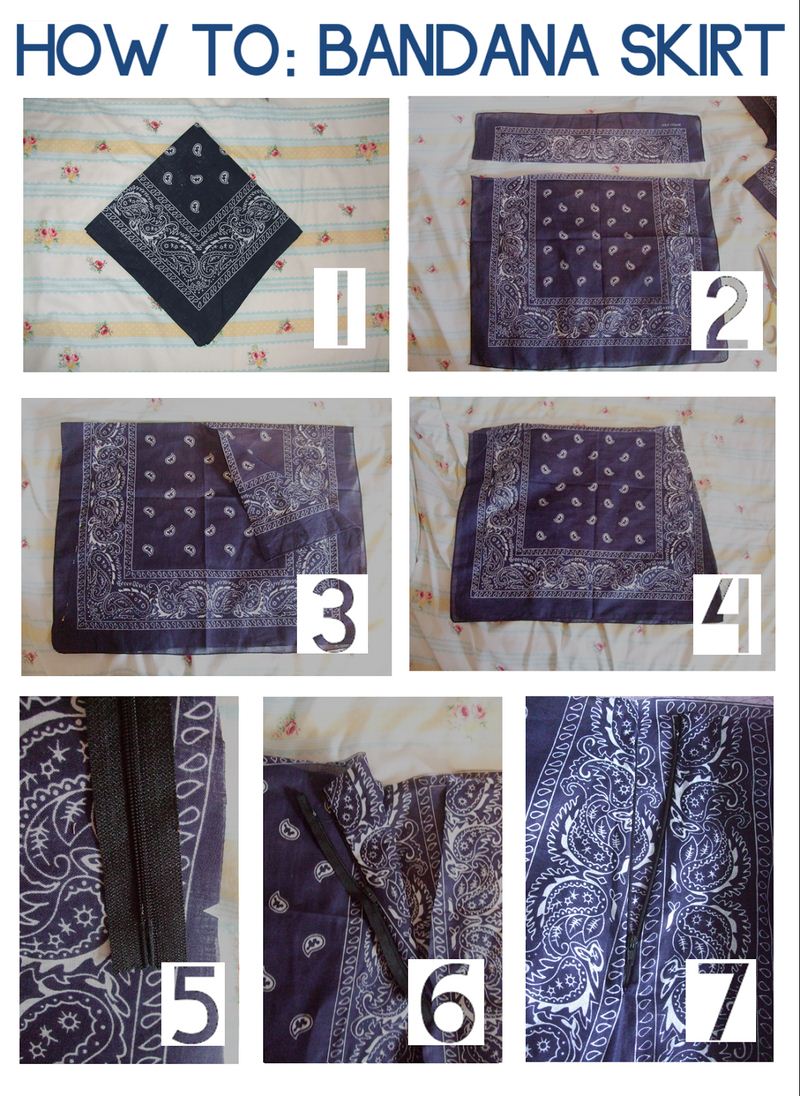 Are you intent on making bandana clothing but the idea of a shirt, which requires you to work with the curves of your chest and torso, still feels a little bit too intimidating for the moment? Then perhaps you’d prefer to try your hand at making a skirt instead! Of course, skirts do require some shaping, but that doesn’t mean you can’t still turn that bandana into what is essentially a stylish tube. Allurescent shows you how it’s done in just a few surprisingly manageable steps! 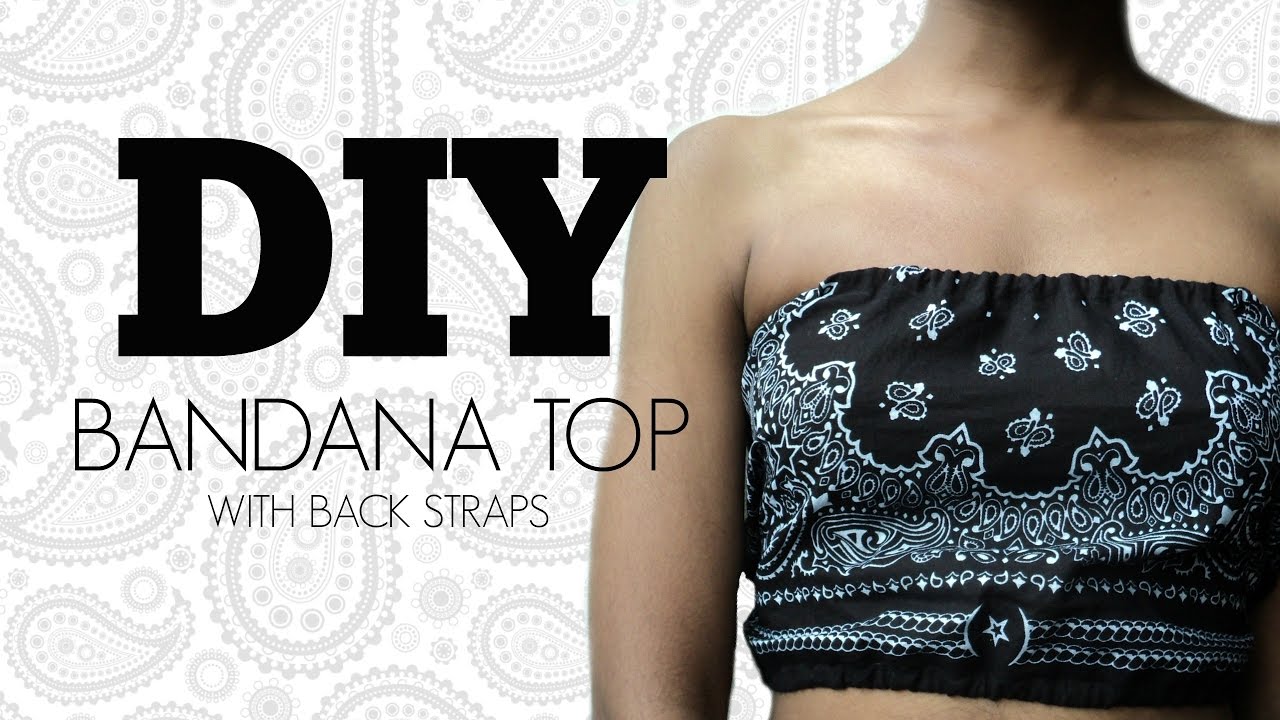 Were you intrigued by the idea of making a cute, summery bandana top now that the weather is finally warming up outside but you’re not sure you want it to be a halter style because you’ve always found that the ties on those bother your neck? In that case, here’s an adorable alternative from Just J! Their tutorial shows you step by step how to make a cute, gathered tube top with straps across the back. 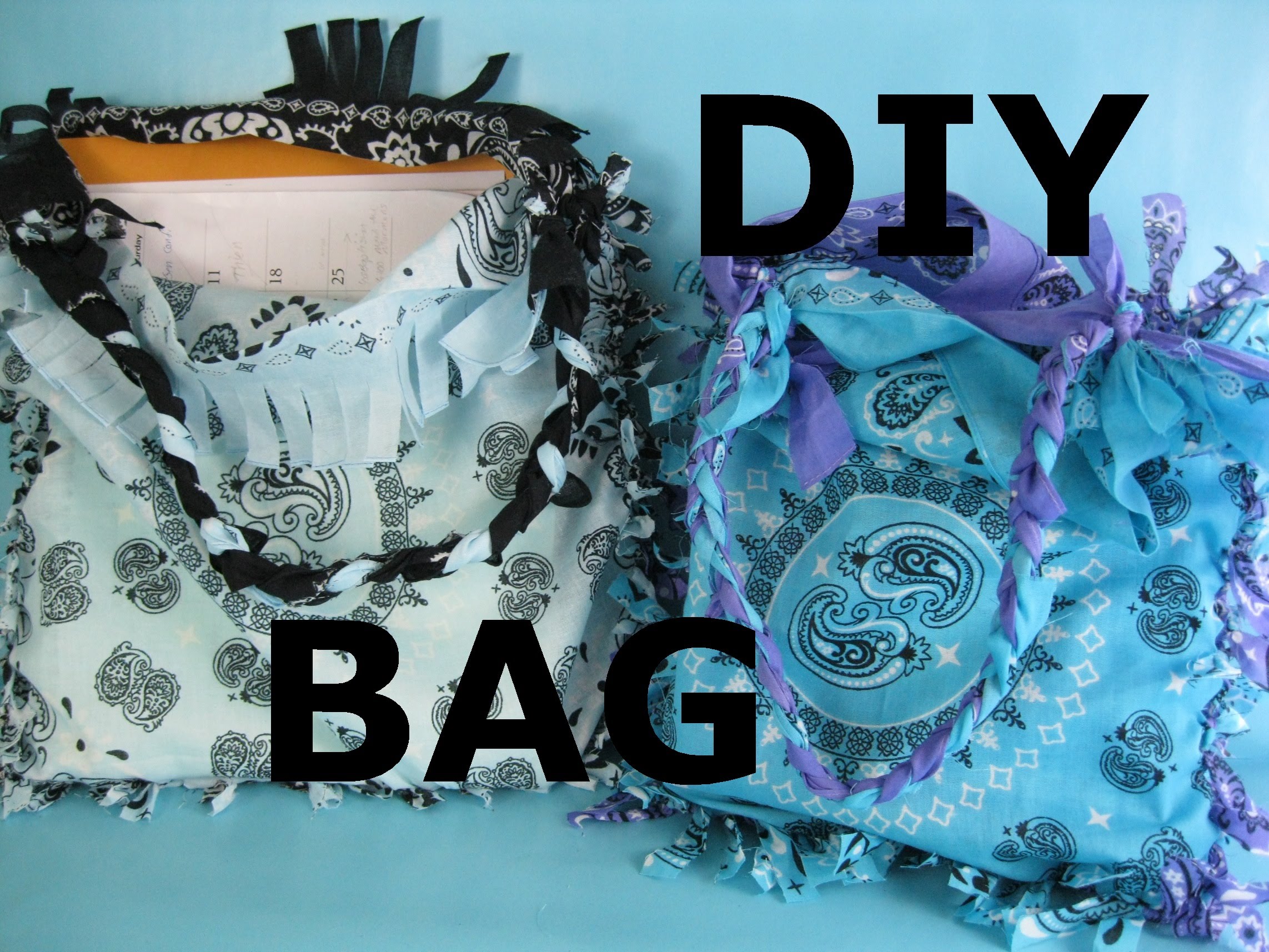 Perhaps, even though you like working with fabric, you actually prefer to avoid sewing whenever you can? Well, even though we do sew, we also have a massive appreciation for for no-sew projects because they highlight just how many diverse ways in which fabric can we transformed into all kinds of things! That’s why we thought this knotted fringe purse made from bandanas of different colours intertwined was such a cool idea. Get the full details for making one of your own on Grandma’s Toys. 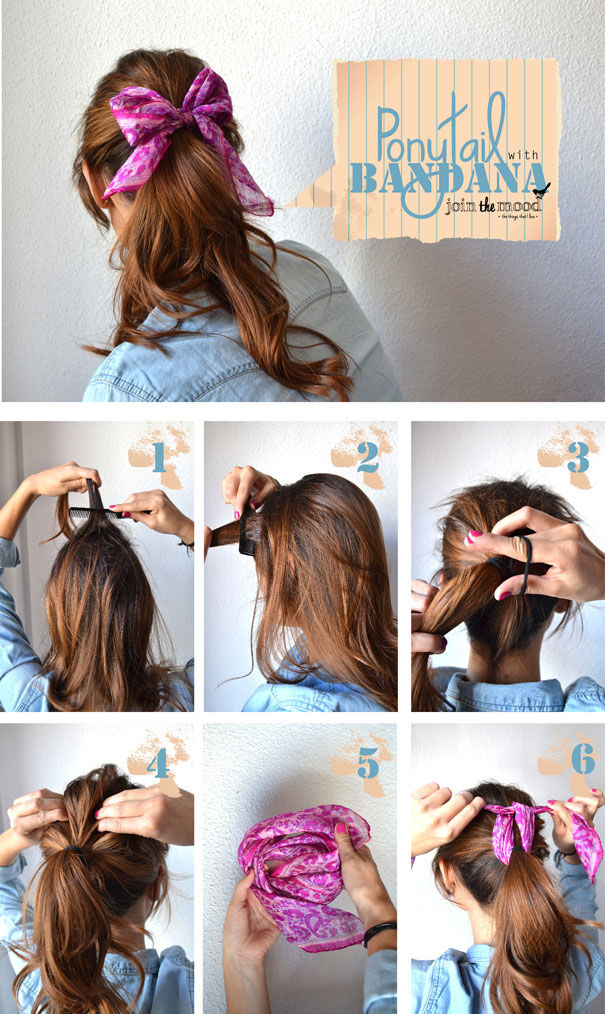 Maybe your idea of getting crafting with bandanas was actually originally a little simpler and more low maintenance before  we started talking about all this sewing and embellishing, so you were just kind of in search for a new way to wear your favourite bandana in your hair? Then perhaps this little tutorial from Love This Pic for tying the perfect bandana bow around a neat, high ponytail will be a little more up your alley! 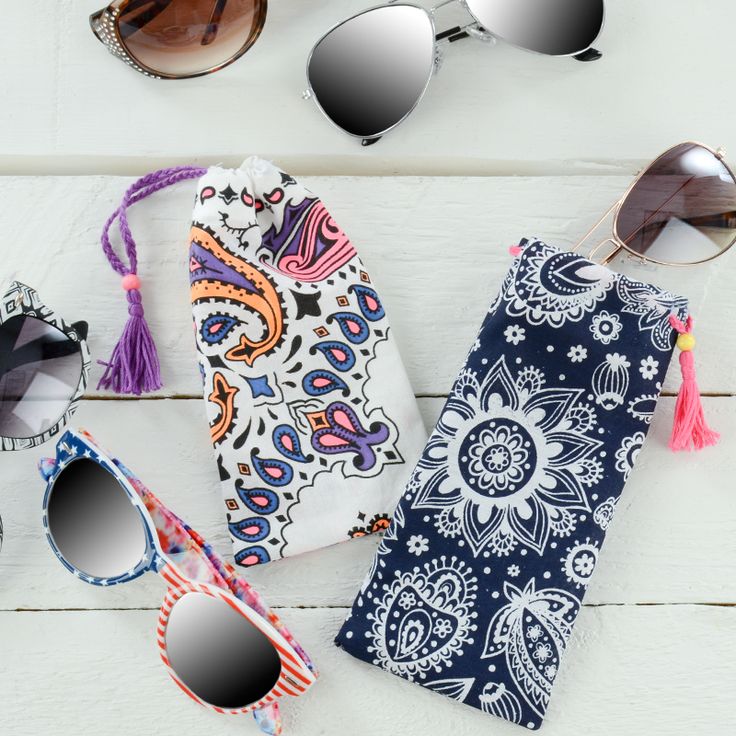 If you’re going to start venturing into the world of sewing, would you like to try and find a very small project to start with so you can practice creating seams without having the project take too many hours? Well, we think that’s a great idea, but we also like the idea of using our time to make something we’ll actually use if it’s going to be a learning experience. That’s why we thought these little sunglasses cases from AC Moore were such a good idea! They show you how to sew little drawstring bags in a way that even beginners will have fun with. 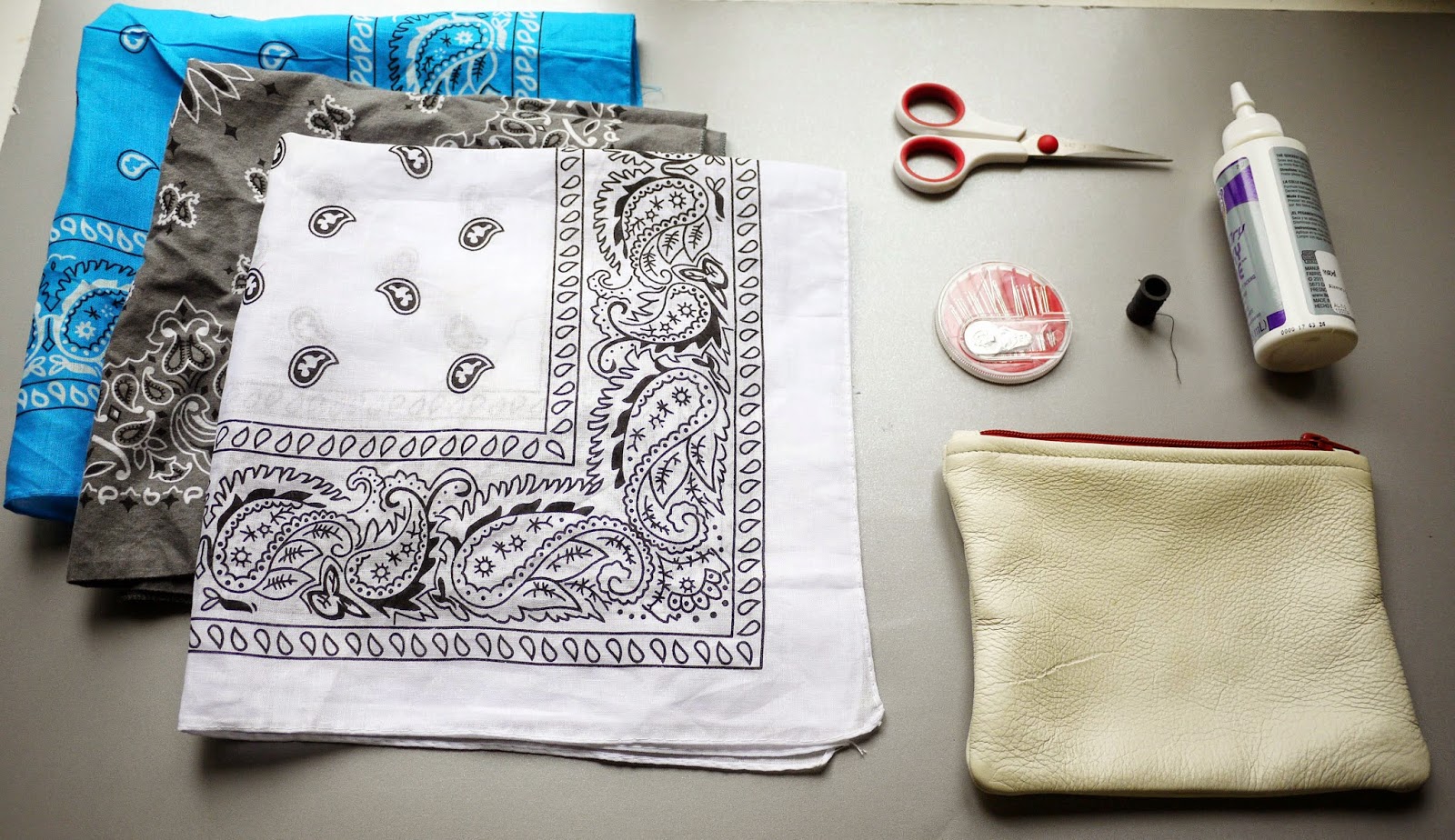 Did we really catch your attention with the idea of a cute little bandana print bag but you don’t have access to a sewing machine right now and you really don’t feel like sewing those seams by hand? Then we’d suggest searching your home or some bargain stores for a pre-made bag in the size you like and following Neato Bonito‘s tutorial for transforming the outside using bandanas and glue instead! 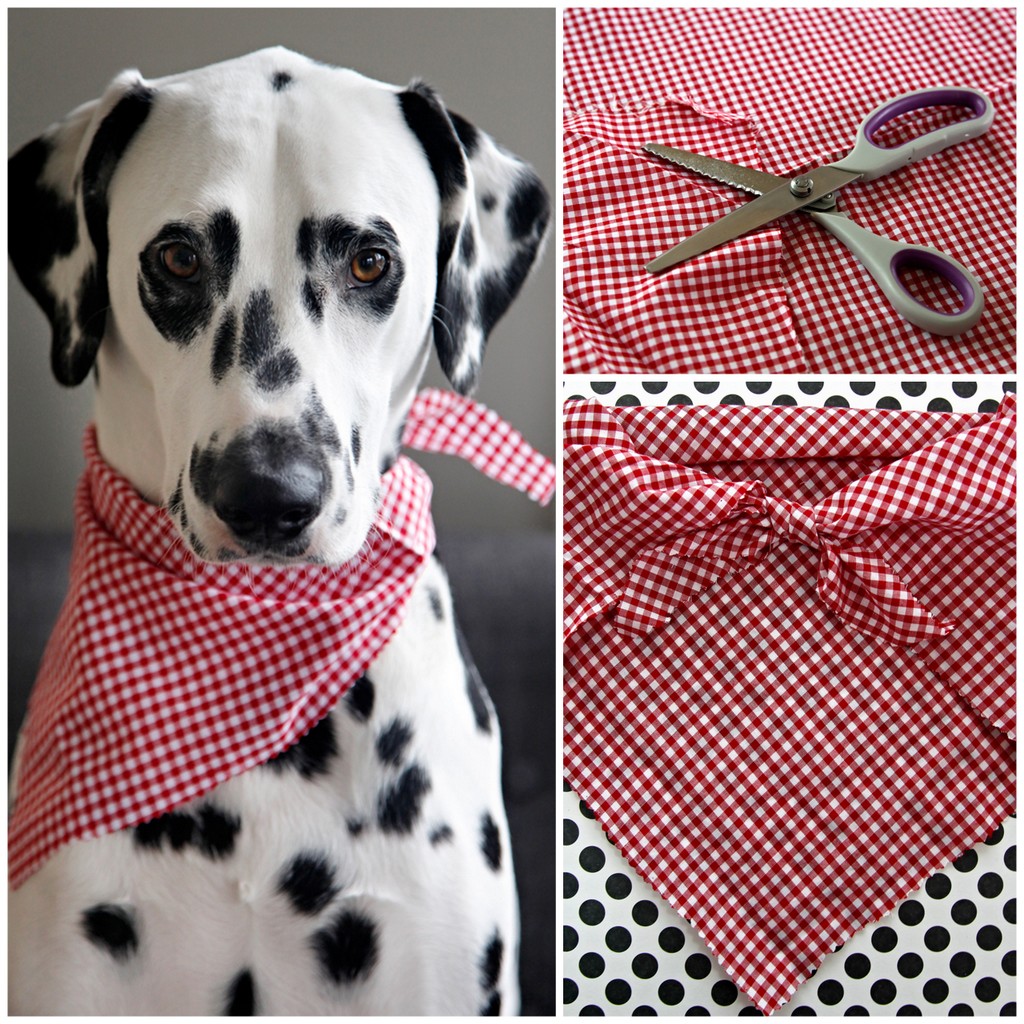 In the same way we couldn’t resist putting the adorable DIY baby bandana on our list even though it wasn’t actually made from bandanas, we also couldn’t help but include this adorable dog bandana! There’s just something about a happy dog wearing a kerchief that makes us smile. That’s why we were so happy to stumble upon this doggie bandana sewing tutorial featured on Dalmatian DIY! We’ll fully admit that we also made a tiny version for our cat (and that’s a true story). 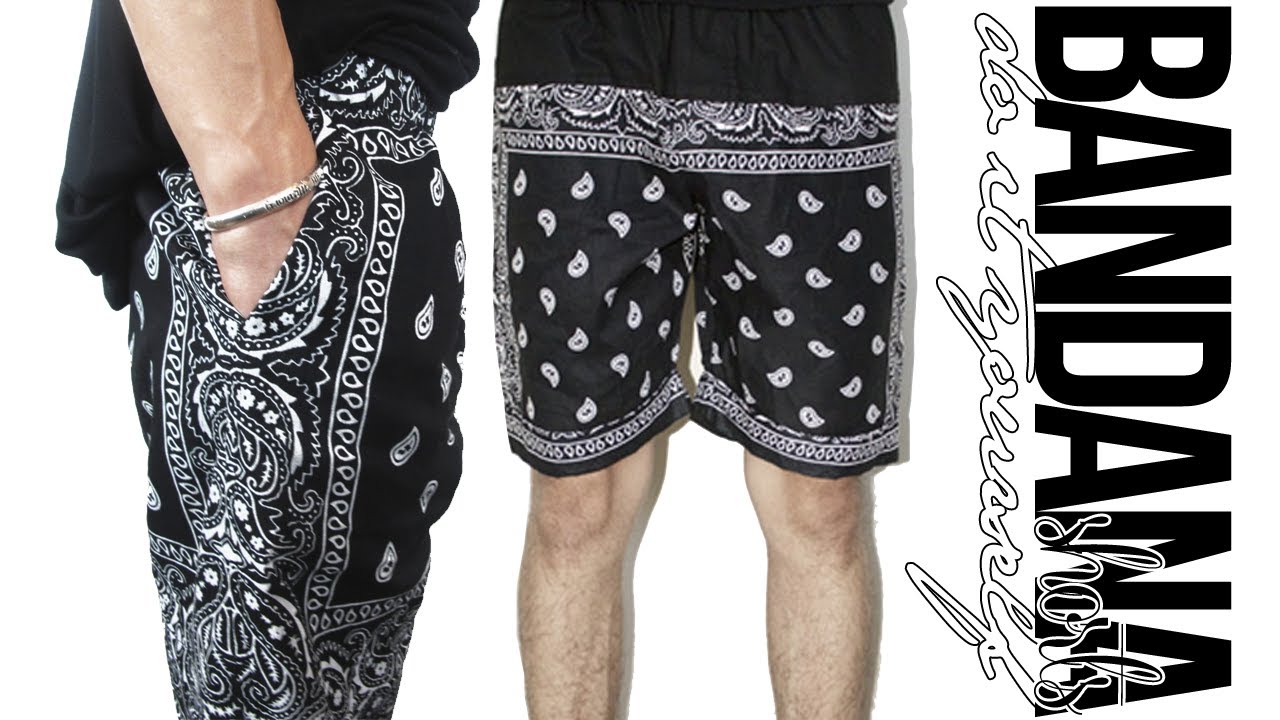 Even if you’re not the kind of person who regularly incorporates actual bandanas into your personal style, it’s totally still possible to have an appreciation for the classic paisley pattern that bandanas proudly feature across their front side. In fact, we actually like paisley so much that we’re more likely to wear clothing made from bandanas than we are to wear bandanas themselves. That’s why we thought these DIY bandana shorts outlined step by step on StyldByChris were so darn cool! 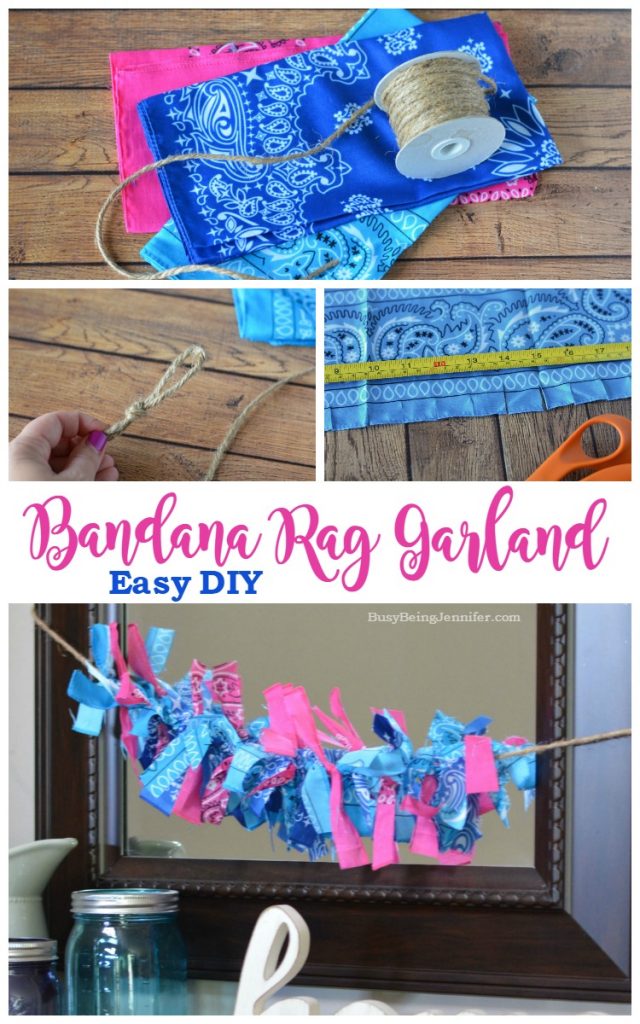 Have you found yourself thinking about the idea of fringed bandana knot tying every since we talked about the knotted purses above, but you like the rag-tag effect it gives so much that you’d almost rather use the technique as home decor? In that case, we definitely think you should take a look at the way Busy Being Jennifer cut their bandanas into strips and tied them in knots around some rope to create a coloruful, rustic chic party garland that we’d be tempted to leave up all the time! 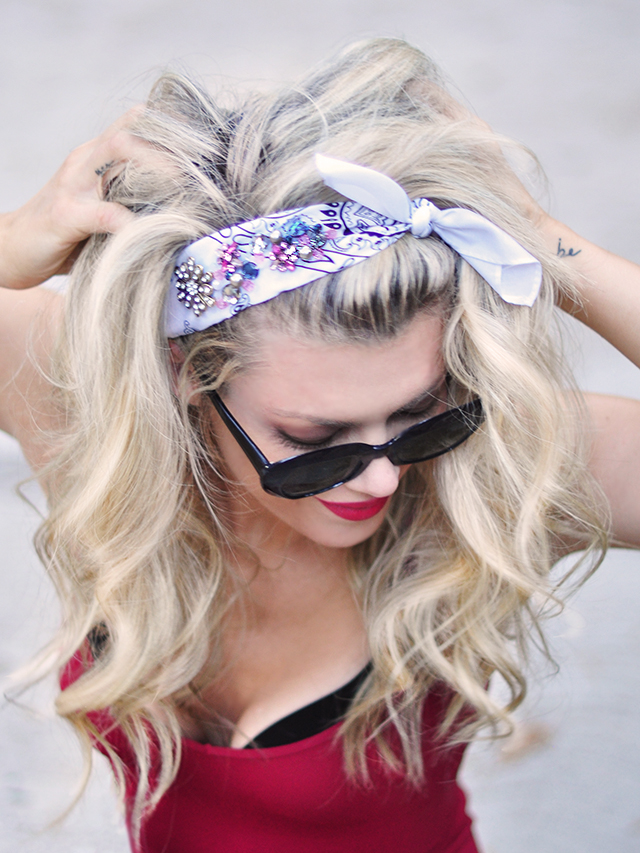 Perhaps your favourite thing to do with a bandana is wear it in your hair, but you’ve been looking for new ways to wear yours even though you’d still prefer to keep it simple? Then maybe adding a little glam to the bandana itself is the best idea for you! That way, no matter how simply you tie it or how you wear your hair with it, you’ll have a little sparkle in the mix. Check out how Love Maegan rhinestoned their bandana using broken jewelry pieces and gemstone brooches.

Just because bandanas are something you might wear as they come doesn’t mean that you have to transform them into something else that’s wearable when you decide to upcycle them. In fact, there are all kinds of other things you can make using bandanas, including little decorative trinkets that are practically too cute for words. These adorable little bandana pumpkins featured on Crafts Unleashed are the perfect example of what we mean!