Glasgow has welcomed the world with an exuberant and proud opening ceremony of the 20th Commonwealth Games at the city’s Celtic Park. Actor John Barrowman led the evening’s entertainment, as he paraded around the arena singing the praises of Scotland’s contributions to the planet – not least Tunnocks Tea Cakes and Irn Bru. Dressed in a purple suit, Barrowman made his entrance from beneath a giant kilt and kissed a veil-wearing male ‘bride’ at a mock Gretna Green wedding. Then, as dozens of dancers jigged around him, the flamboyant star took an estimated one billion viewers on a journey celebrating the Loch Ness monster, heather, and the nation’s inventions, such as the TV and the steam engine. There was also singing on top of whisky barrels and St Andrews was celebrated as the home of golf. 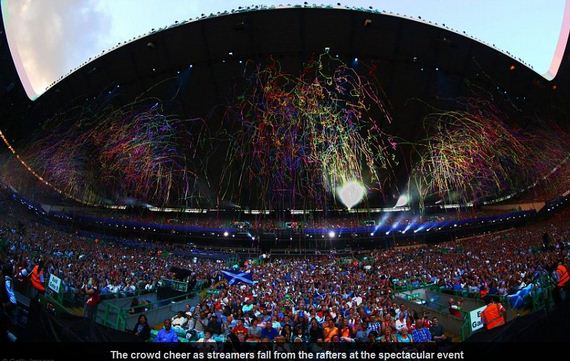 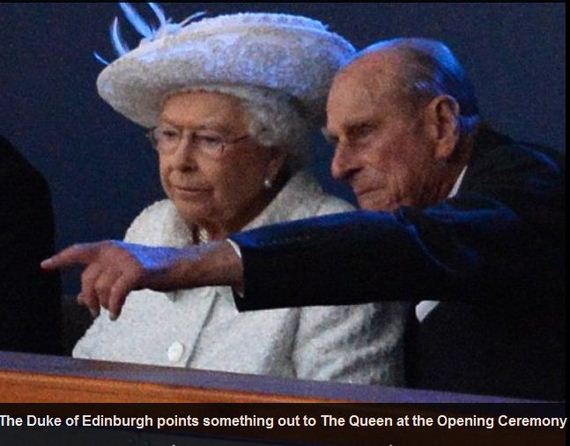 The Queen and Duke were met by Commonwealth Games Scotland chairman Michael Kavanagh, Glasgow 2014 organising committee chairman Lord Robert Smith of Kelvin and Commonwealth Games Federation president Prince Imran from Malaysia.  She was presented with a posy before being welcomed by Scottish broadcaster Robbie Shepherd, who provides the commentary at the annual Braemar Gathering of which the Queen is patron.  Members of the audience joined in the singing of God Save The Queen by Robert Lovie, with the mountains and glens of Scotland as a backdrop on the huge screen.  As she arrived into the arena, Her Majesty was greeted with a massive cheer which was all the more surprising considering the traditional sympathies of Celtic supporters.  The club has long been associated with Glasgow’s Irish community and therefore with Irish nationalism and in the past would have been more likely to boo the national anthem which is sung enthusiastically by their bitter rivals Rangers.  The Queen’s baton, meanwhile, arrived on Clydeside on board a sea-plane which viewers watched land near the SECC complex, which will host several of the competitions.  Round-the-world cyclist Mark Beaumont, who has followed the baton on its 190,000km journey, emerged from the plane with it held aloft to waiting crowds.  Earlier in the ceremony, dancers from Scottish Ballet performed a routine to an acoustic version of The Proclaimers hit I’m Gonna Be (500 Miles). 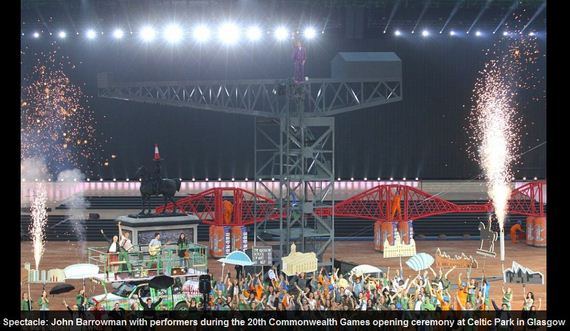 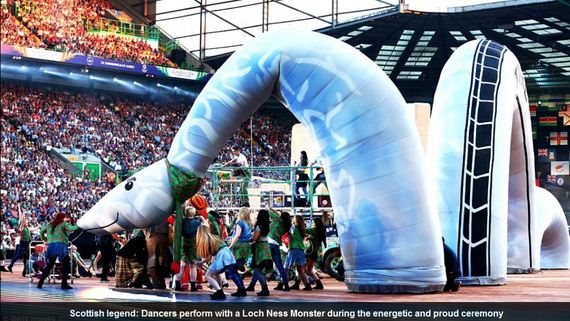 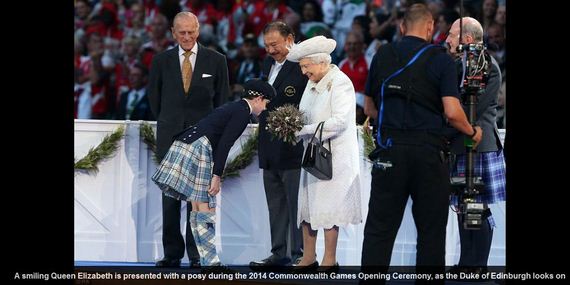 Jamaican fans in traditional dress were dancing and drumming, contrasting with the sound of bagpipes and the sight of spectators in tartan dresses and kilts.  Glasgow singer Amy Macdonald took over the entertainment as she appeared on screen strumming her guitar in the city’s George Square before appearing in the arena itself.  There were huge cheers when she was joined in her performance of Rhythm Of My Heart by Rod Stewart, for whom the song was a big hit.  Susan Boyle followed with a version of the popular tune Mull Of Kintyre, co-written by Sir Paul McCartney and originally performed by Wings.  Wearing a purple dress with tartan-patterned lapels, Boyle was accompanied by the piano before the arrival of the Pipes and Drums of the Royal Regiment of Scotland and young Highland dancers.  Team India, as the host of the 2010 Games, were the first competing nation to enter the arena to cheers from spectators.  Actor Ewan McGregor then introduced video footage from Bangladesh showing the work of Unicef to protect children affected by flooding there, and Indian cricketing star Sachin Tendulkar told viewers: ‘We have an opportunity to show the world what we can do when we act as one.’ 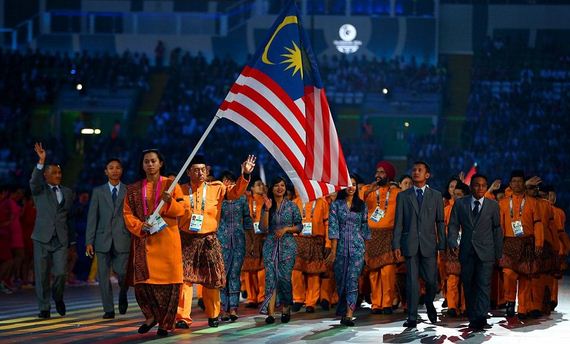 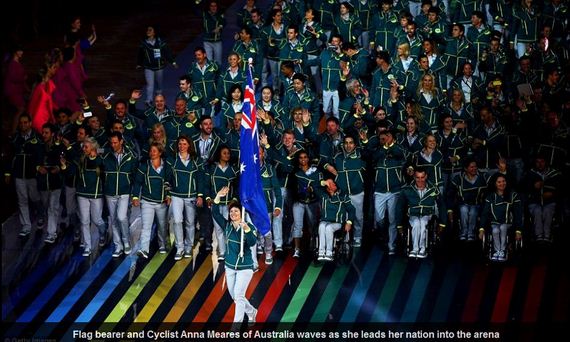 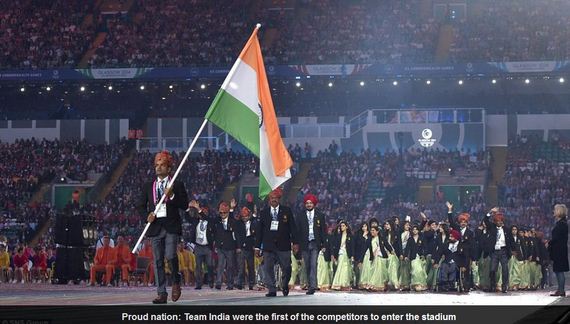 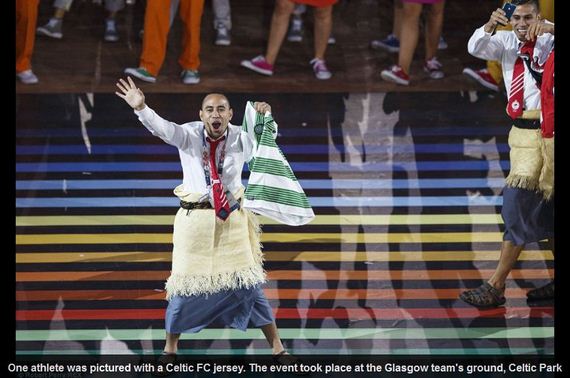 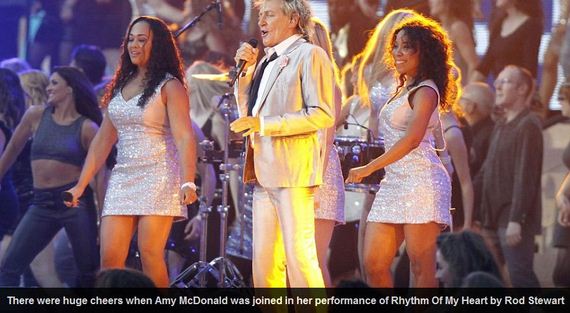 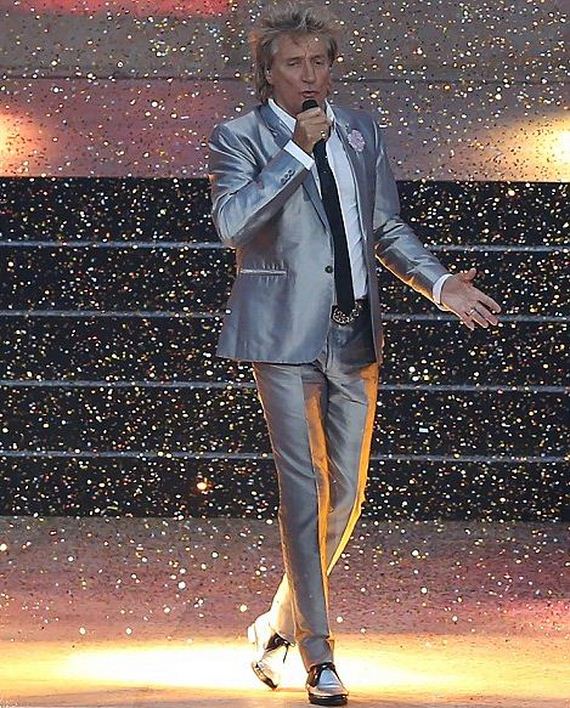 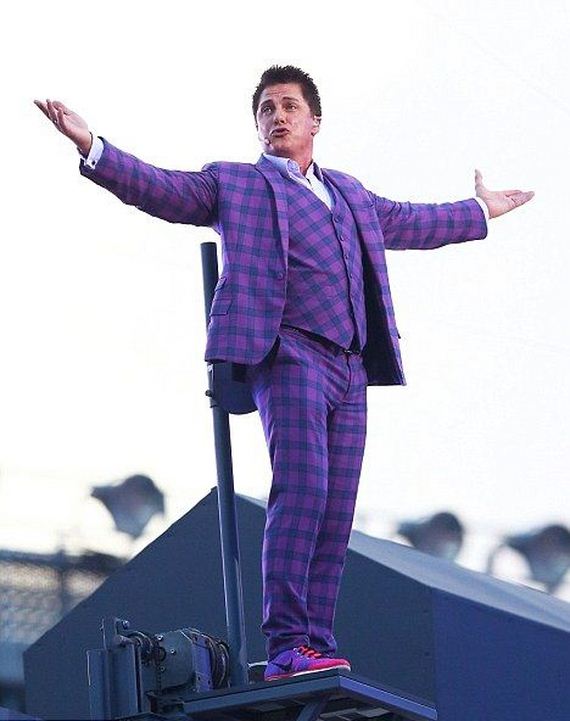 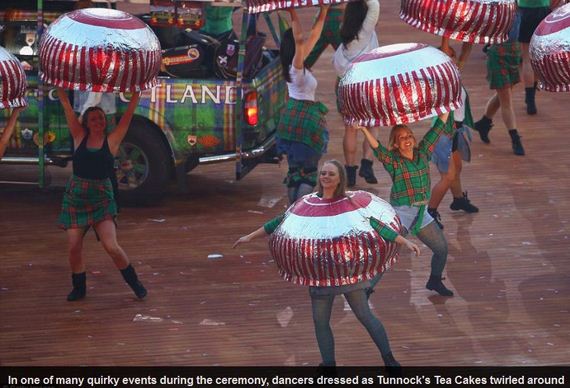 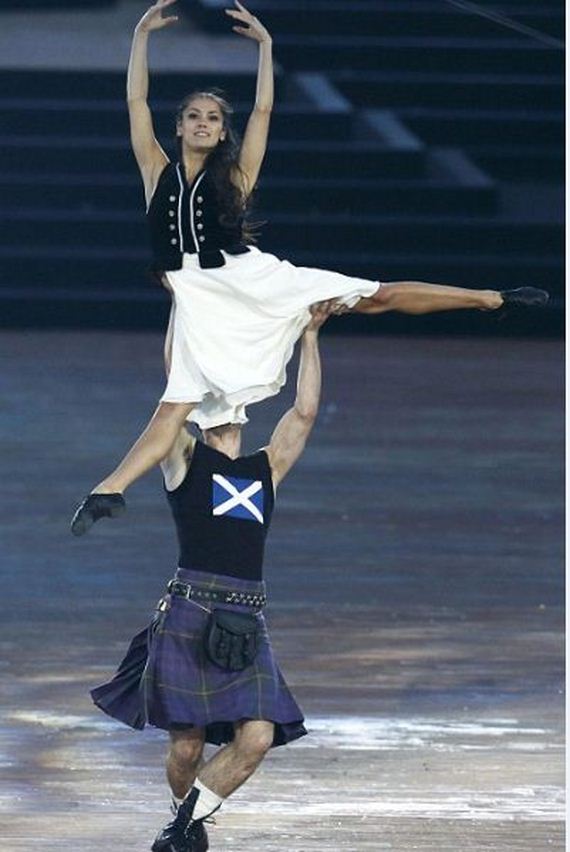 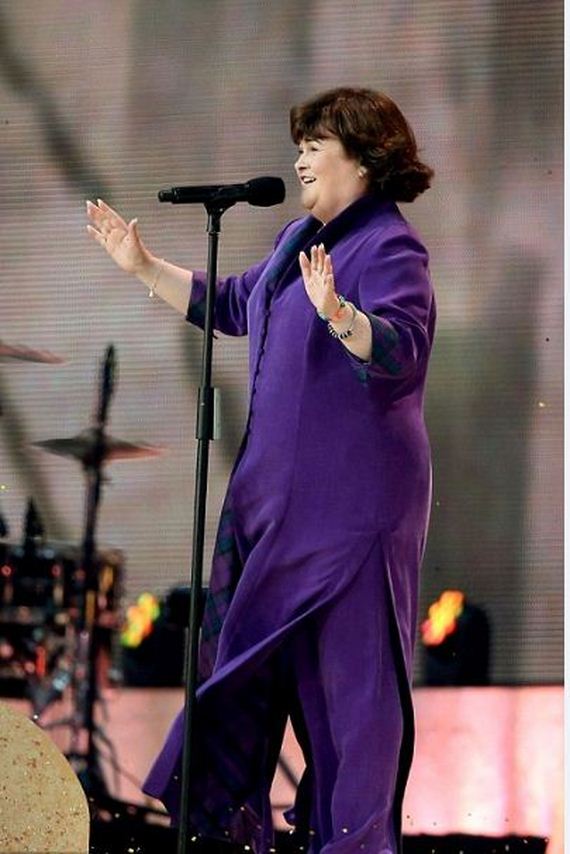 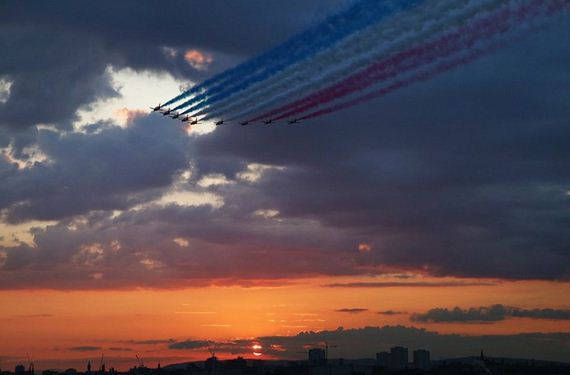 Majestic: The RAF Red Arrows fly over Glasgow during the Opening Ceremony for the Glasgow 2014 Commonwealth Games at Celtic Park 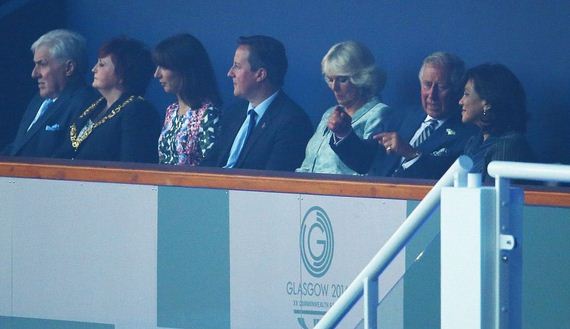 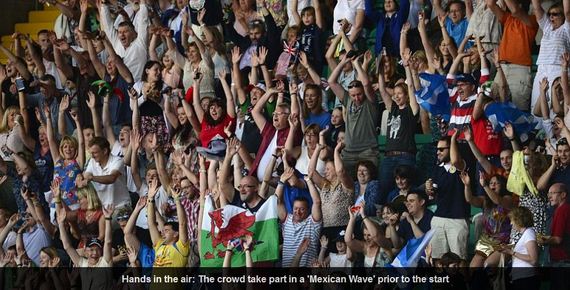 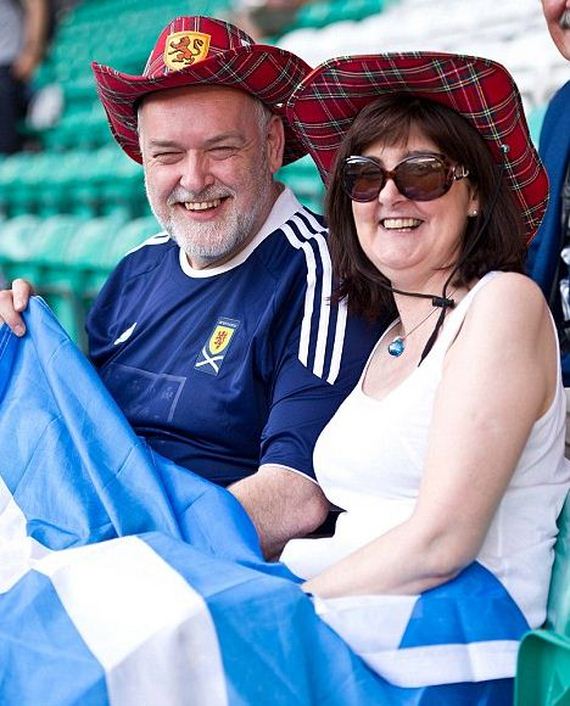 Heidi Hunter, 44, from Lithgow in New South Wales, Australia, said she was not sure what to expect from the ceremony.  She said: ‘We were so busy before we left that we didn’t get any time to read much about it. We know Rod Stewart is performing and are really looking forward to it. Other than that, we don’t have a clue.  ‘We travelled over for the Games and have tickets mostly for hockey. We weren’t expecting this weather and we can’t believe how great the atmosphere has been so far – it’s fabulous.’  Tracy McCarroll arrived at the stadium with her daughters Zoe, 10, and Eva, six, who were both wrapped in Saltires.  Mrs McCarroll, from Strathaven in South Lanarkshire, said: ‘We just can’t wait to get in there and for it to start. There’s such huge, big excitement about it all and it’s great for the rest of the world to be watching and thinking “wow, that’s Glasgow”.’ 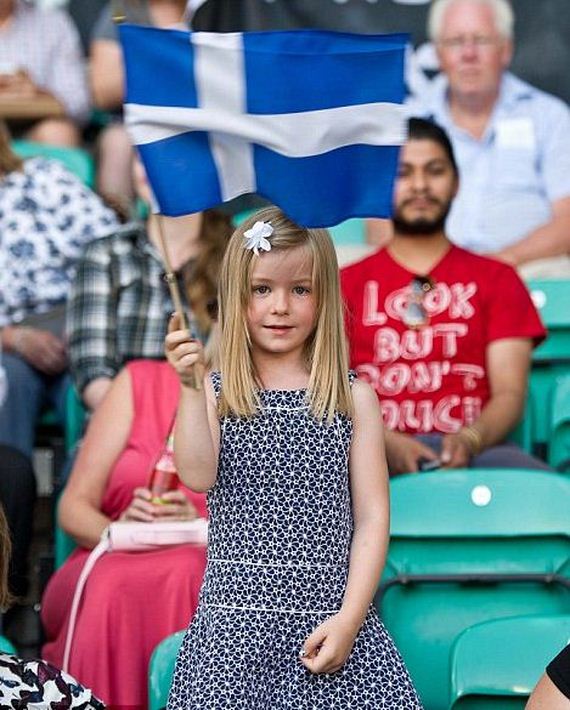 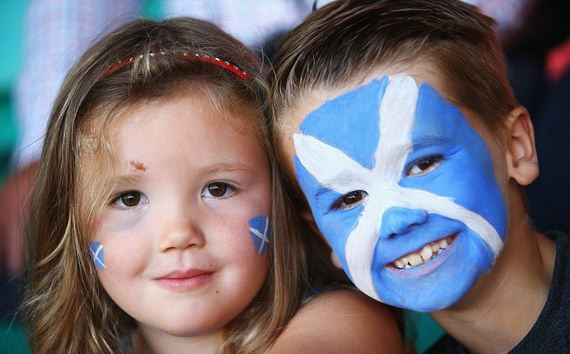 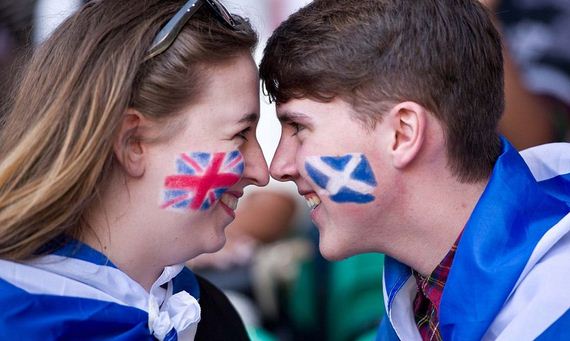