So, grab your sharpest knife, carving tools, newspapers, and wooden spoons ready and attack those pumpkins! But, before you do…check out this awesome list of ideas and see what you can do better! You know me, I want to see pictures of your results! So, bring them on!

Usually when you carve a pumpkin, you use a very sharp knife or a small saw in order to cut pieces out so the light can shine through and show your pattern in the dark. Crafty Nest, however, suggests using a drill to create circles instead! I know Halloween is supposed to be spooky, but how pretty do those flowers look in the top of that pumpkin with the flame of a tea light candle glowing through? 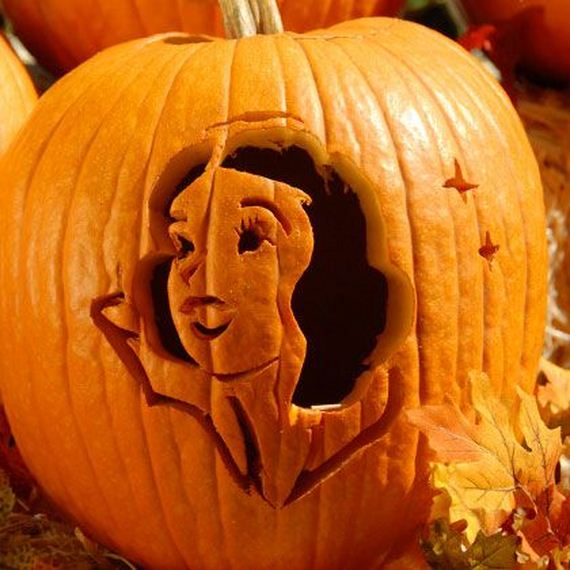 Family Disney guides you through the process of carving out little pumpkin portraits of your favourite Disney princesses! This Snow White version is absolutely adorable, but the website gives you instructions for making other princesses too if you prefer. This is a great option for little kids who aren’t so sure about this whole “scary holiday” thing yet. They’ll get to participate without feeling uncomfortable. 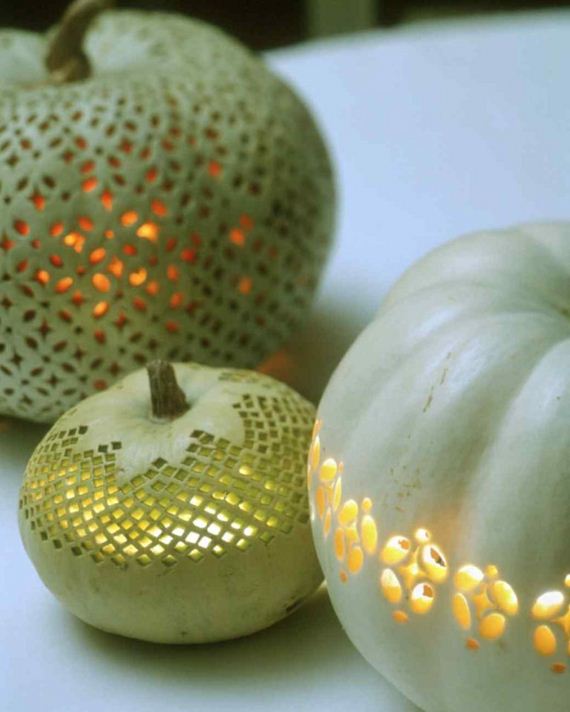 Are you looking for a more decorative design and you’re willing to invest a little more time and energy into its intricacy than the average trick or treater might be? Then take  a look at how stunning these lace designs by Martha Stewart look in white pumpkins of all different sizes! They’ll look gorgeous glowing from your porch on fall nights. 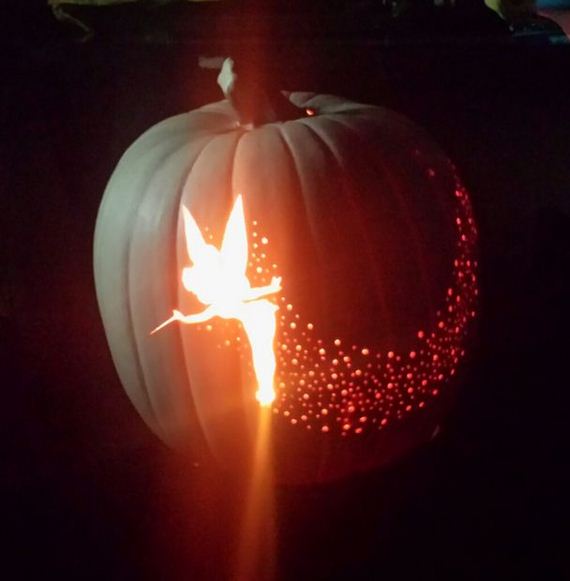 Maybe your kids were a big fan of the Disney idea, but the princesses aren’t their favourite part? Here’s a design for the fairy lovers in the group! Instructables shows you how to cut out a big piece in the shape of Tinkerbell, followed by tiny circles in different sizes to make it look like she’s just flown in leaving a trail of fairy dust.

5. Skull in a pumpkin

Maybe your kids were a big fan of the Disney idea, but the princesses aren’t their favourite part? Here’s a design for the fairy lovers in the group! Instructables shows you how to cut out a big piece in the shape of Tinkerbell, followed by tiny circles in different sizes to make it look like she’s just flown in leaving a trail of fairy dust. 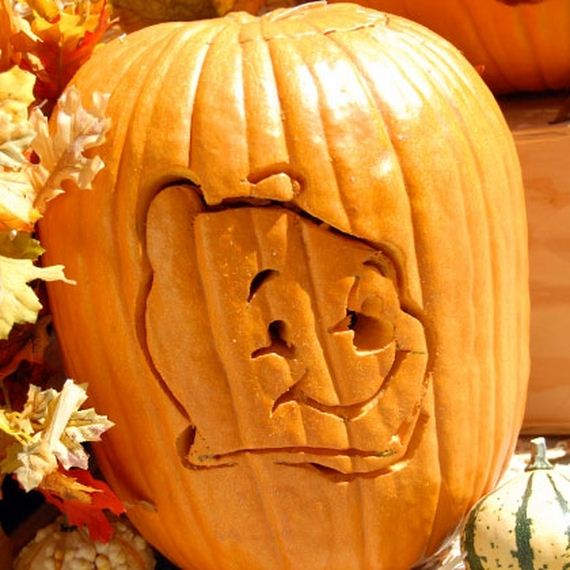 Perhaps your kids are still young enough to prefer Disney cartoons to ghosts and goblins, but they’re not that invested in either princesses or fairies? In that case, Family Disney has you covered with an adorable Winnie the Pooh alternative! This design is also great because it’s easy enough that older kids can try it themselves.

Perhaps you’re a bigger fan of foam pumpkins than you are of real ones because you don’t have to gut them and deal with all the slimy insides? The designs you cut into a foam pumpkin will also last longer than ones that eventually dry up and rot. Plucking Daisies suggests this dark night sky pattern, using the star shapes that you cut out of the sides as embellishments to stick on the top. 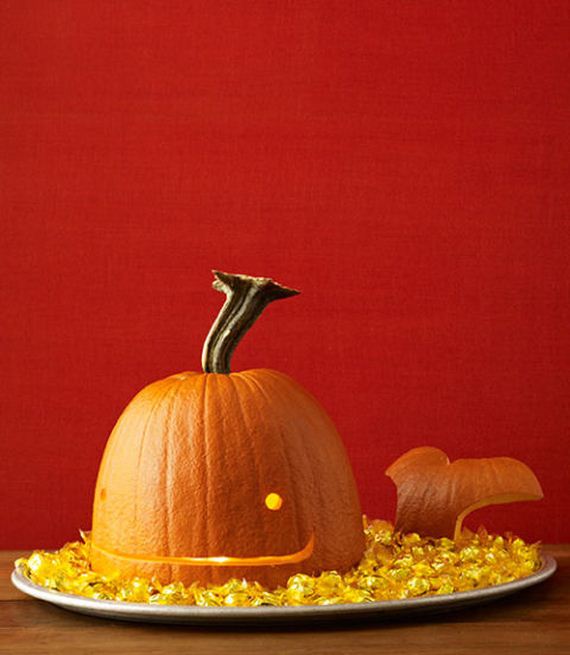 re you looking for fun, unique ideas for the Halloween party you’re throwing for your kids and you’d rather something a tad more creative than just a classic jack-o-lantern? Try this funny little whale on a tray instead! Fill the tray with candies as the “water”, just like Woman’s Day did, so people can help themselves throughout the night. 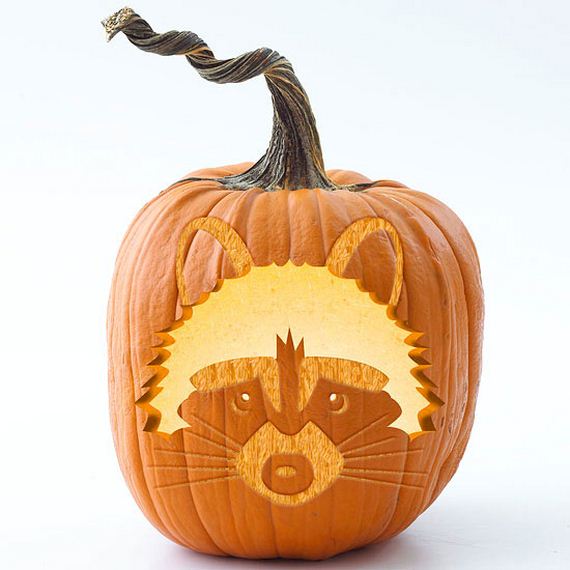 Are your kids big fans of anything involving cute animals? Then try making this adorable, furry little raccoon with them! The design is quite simple except for the muzzle, where you’ll simply carve away enough of the outside that the light and shine through the pumpkin wall, rather than actually cutting the piece out completely. BHG shows you how it’s done. 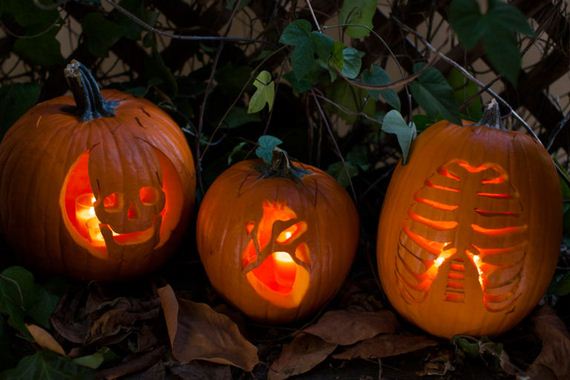 Do you have some budding little scientists or doctors in your midst at home? Then I’d be willing to bet that they’ll take an innocently gory fascination in these body part pumpkin carving designs! Despite looking rather impressive, they’re made of nice, big chunks, making them quite easy to carve. That means that kids who are old enough to handle little carving saws can try this pattern themselves! Check out the patterns for making each of these on Brit + Co. 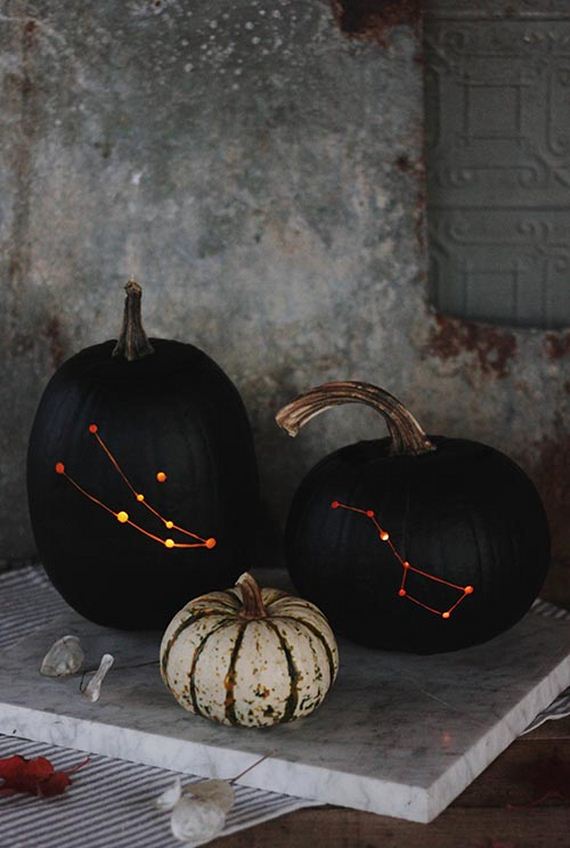 Have you ever seen people choose to paint their pumpkins instead of carving them? It’s an awesome look, but many prefer to stick with the classic carving idea. Design Sponge, however, suggests combining the two techniques to make an awesome constellation effect! Paint the entire pumpkin black and then drill holes in the shape of your favourite star pattern into the surface of the pumpkin. I’m so obsessed with these that I’d make them all year round if pumpkins were so available in every season! 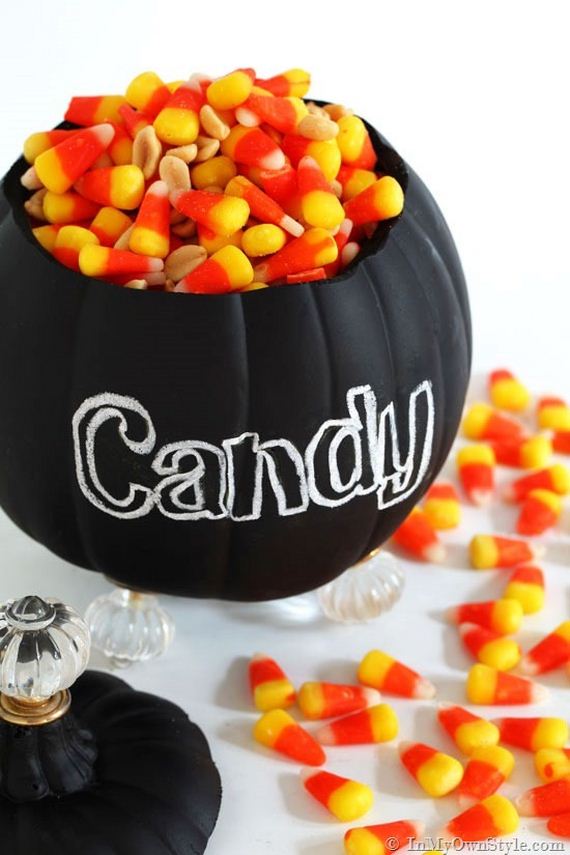 Perhaps you really want to have pumpkins around but you just don’t want to worry about whether they’re rotting or you’re very sensitive to smells? Try this adorable little DIY pumpkin candy holder design instead! In My Own Style suggests finding a cute pumpkin shapes jar and painting it for the season, then setting it out at your Halloween party for people to help themselves. 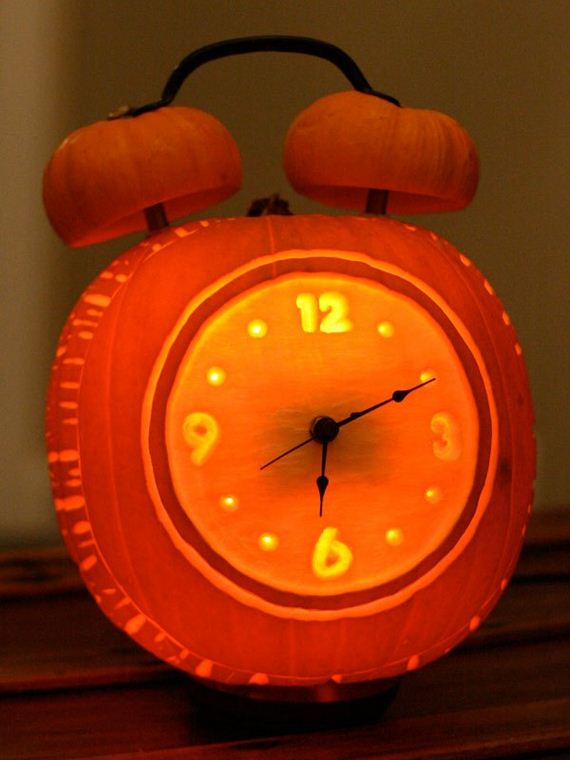 Built by Kids guides you through the process of making more than just a jack-o-lantern. This pumpkin has been carved to look like a spooky little Halloween clock, complete with an alarm on top and hands! Use smaller pumpkins cut to make the bells on top and a little battery powered clock hand set from the dollar store. I love the artistic look of shaving the pumpkin very thin rather than simply cutting right through the side. 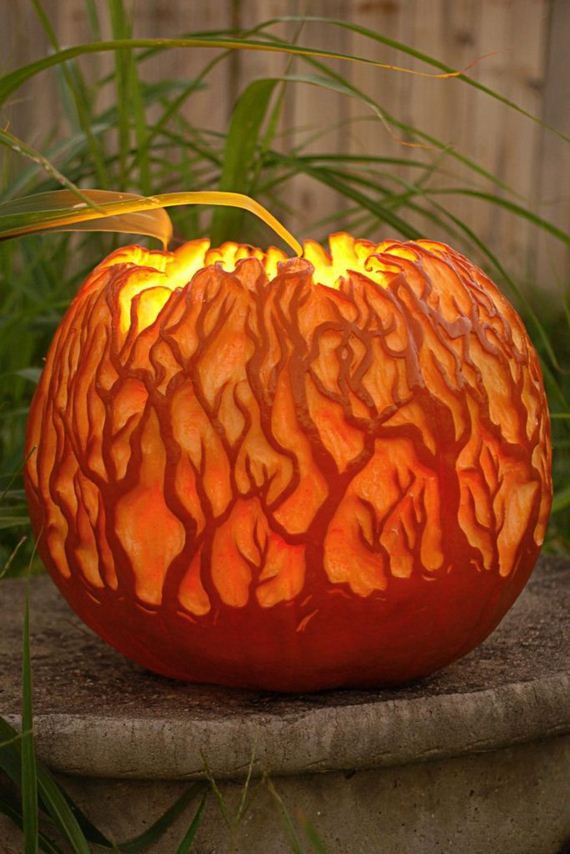 Are you a big fan of the thinly shaved pumpkin look too, but you’re not sure you’re ready to commit to an entire clock? Try this intricate and rather impressive shaved tree design instead! You’ll have to be very light handed in order to get a thin layer without punching through the side, but the awesomely spooky effect is worth it! HGTV shows you how it’s done. 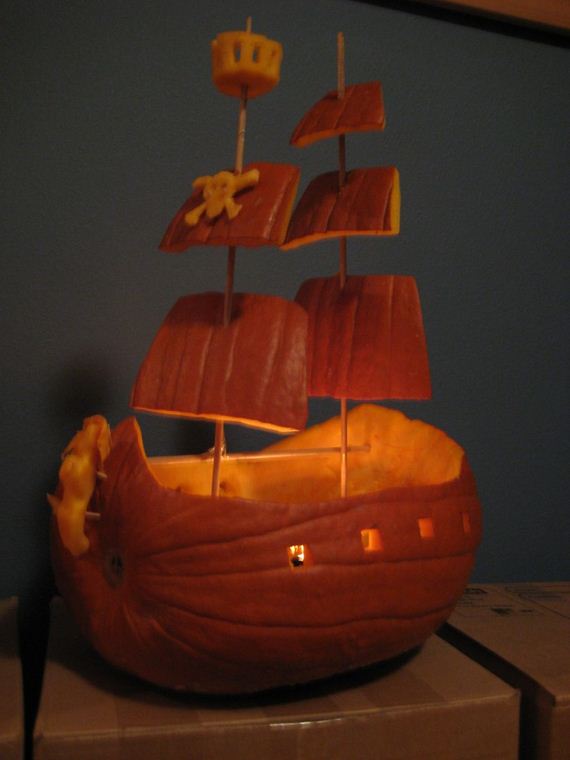 Are you looking for a way to make your pumpkin extra impressive, but you’d rather something a little more unique than just your standard carving? Try building an entire pirate ship instead! Cut a whole section from one side and tip the pumpkin on its opposite side. Use wooden kebab sticks and cut pieces from the larger section you removed to build your sails and masts! Check it out in more detail on erindean.